This sleazy feminist broad whines that it is soooooo tough being a mahn….

Then according to her, men need more “intimacy.”  Sounds like some creepy line Jagoff Donovan or Milo Y would use to try to get straight men to drink with them…

Yeah, titty bars are a hustle that “empowered feminist womyn” use to steal money from guys who are chumps for even going into those places in the first place.  What did you think???

I need freedom, but your feminist brain can’t comprehend that.  You just think “men should be more like womyn” while refusing to look at their disposability or that society see’s them as walking, breathing utilities… 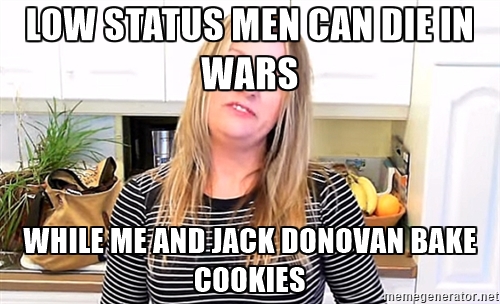 …a womyn who lives off of the labors of her hubby is telling everyone that what a white nationalist gay man says is manly is “manly.”

The question you gotta ask is why are both soooo invested in male disposability?

Somehow listening to either of these two doofuses about “manliness” seems like trying to become a “real man” by drinking lite beer.

Why would they talk about something they know nothing about?

Why be a guy who is so insecure about what it is “to be a man” that he would listen to someone who is invested in seeing them fail?

It’s like a business owner who wants to pay minimum wage and cheat his laborers out of overtime telling those laborers that “real men” work extra hard off the clock and don’t worry if their paystubs don’t equal their “sweat equity.”

Just think about how they are trying to rip you off…

On the flip side, some trad con like Judgy Bitch would gladly send her son’s to die in whatever war the asshole elites dream up just so another’s daughter’s can have kids.  Does Judgy get to be honorary grandma?

Just remember, resist those that want to take your freedom and change you into a disposable utility to be used for their deviant ends… 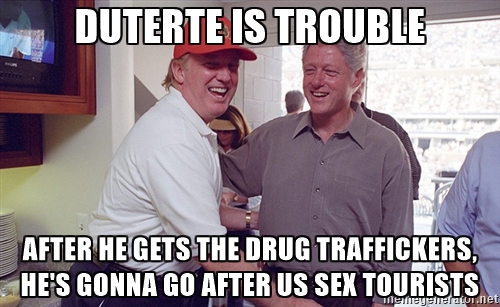 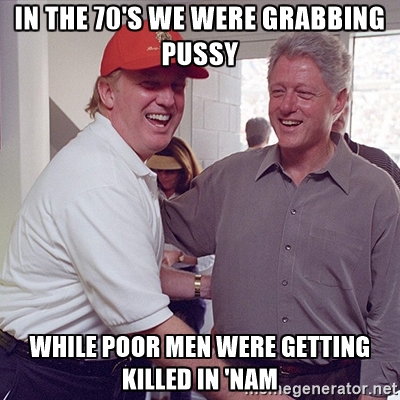 …so, are trumpiepoops comments a surprise to anyone???

…as I’ve mentioned before, I worked with a racist Mexican (no, creeper liberals, it’s not just whites who are waycist.)  He would make several demeaning comments about me but because I needed a paycheck I kept my mouth shut.  He even hid my lunch when we worked at a fucking trade show.  He would often make disgusting sexual comments.  One day when he kept on talking about his “conquests” I remained quiet.  He said I was either a virgin or gay because I didn’t have any tales to tell.  I finally responded that I was neither and that he could ask his mom and sister. He got upset and looked like he was gonna punch me.  Too bad he didn’t, I woulda probably kicked his ass but even if I didn’t, welp, coulda called la migra.  Haha, and according to you dirt bag liberals, I’m the waycist because I speak Engwrish.  And my skin is darker, BTW.  When is the last time a goddamned liberal did a thing for me?

So femanzi’s keep on cryin’ ’bout how eville ALL men are whilst you demonize low status men with the Nice Guy ™ tag.  Did you ever think to wonder that maybe the “alpha males” demean and dehumanize low status men before they even get to womyn?  Oh, that’s right, low status men aren’t even human to you-better check my goddamned fucking privilege.  An “alpha” like trumpiepoops would gladly shit all over a low status male such as myself to get whatever he wanted.  Don’t you think a sociopath like Warmachine would gladly kick a low status male’s ass just because the cycling of his ‘roids put him into a rage?  Do you think the public would care if he seriously beat a low status male?  Probably wouldn’t even spend a day in jail. But he beats a womyn and he is the lowest of the low.  Don’t get me wrong, I’ve seen the pictures and I don’t have any sympathy if Roid Boi spends the next 20 years  in jail, I’m just saying that wouldn’t be the case if he beat up a low status guy.  The fucking judge would probably ask the guy, “What did you do to piss off Ragehead, err, John Paul Koppenpooper.”

The alt-right are a bunch of low class racist’s who believe in psuedo-science like HBD.  So, it would seem they would also be homophobic.  But they love, love, love Jagoff Donovan and Milo Y.  Why is this the case?

Both Jagoff and Creeper Milo have embraced male disposability with a glee that even most man hating feminist’s don’t take on.  It is a rare hatred of low-status men seen most often by the likes of trad-cons like Judgy B*tch.  Milo thinks men should have their penises mutilated because he finds it “sexy.”  Jagoff thinks “weak” men should kill themselves.  You can use that as a litmus test, if either of these two scum bags are embraced, you are in a space that is hostile to low status men even if it uses some meaningless, bullshit term like MRA.

I believe that these “men” are embraced by the alt-right because they have a privilege similar to women.  Yes, white homosexual men are extraordinarily privileged and just like spoiled white womyn will pull the “misogyny” card they will pull the “homophobia” card.  Just think, when these neo nazi thugs walk down the street and attack a man with darker skin, who will the pigs believe when the man with darker skin is merely defending himself.  Y’know it is a “hate crime” to attack a gay and these losers with no moral compass are just like liberals who always see themselves as the victim–they would likely lie and say they were attacked.  There’s also an addendum to this.  One sleazy MRA, I can’t remember if it was John the Other or Dean Esmay–  He mentioned that when “MRA’s” go out in public, they want to have feMRA’s with them.  This is because they will not be attacked physically by male feminist’s because male feminist’s would not hit a woman.  I think this is part of it.  Liberals love gays and want to absolve them of all responsibility.  If a gay does something reprehensible, it is not because they are “a bad person” but because they are a “victim of homophobia.”  So the alt-righ gets a “get out of jail free” card by having gays in their ranks.  They are a “diverse” group, not just an evillle bunch of het, cis white men.  The homo’s give them “legit victim cred.”

Now if you think I’m exaggerating about any of this, let’s just say that I am in the class of men that whenever we go to a store and buy something, we always carry the receipt lest we be “questioned.”  Let’s just say that’s something Milo and Jag have never had to deal with.  Hey Alt-Right– Fuck You!