As horribly as TamerLame has treated me, I did not think he would sink this low.

He has shown his willingness to doxx men he doesn’t like.  In my eyes he is worse than a feminist.  This puts him in the same league as human garbage like Aaron Clarey who called for the doxxing of MGTOW’s.  While I now think MGTOW’s are a bunch of scammers, it is still exceptionally underhanded to doxx them. Even jerks lie David Futrelle didn’t go that far.

Here is an image where TamerLame threatens to show someone’s location (blotted out in red for obvious reasons.) 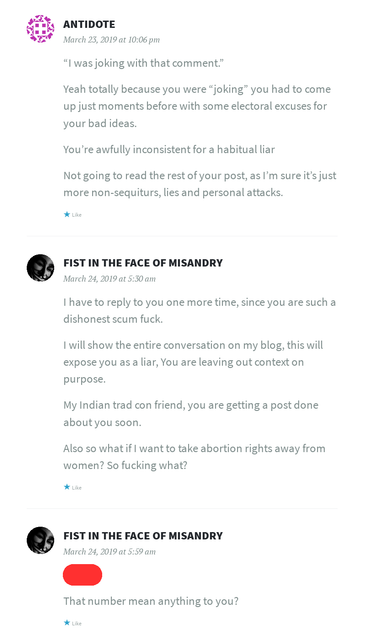 Remember guys, don’t trust these fuckers at all.  They will try to hurt you because you don’t want to join their horrid “collekkktive.”

Analyzing Male Slavery/Tamerlane/Sulla/Fist in the Face of Misandry

Fuck You All!!! You are not Pro-male, you are authoritarian bullies who hate low status men and attack us in a cowardly attempt to gain power!!!

Sadly, this post I wrote before becomes relevant again:

“This brings me to the next sad but logical conclusion. With doxxing and threats against MGTOW men’s employment, will these mentally unhinged M(h)RA’s stoop lower? Many MGTOW men live alone (duh?) and are likely alienated from their families. Even if the AVfM whackos don’t come after them with physical violence–and an isolated man is a perfect target…. Don’t put it past them that they may do something reprehensible like murder a MGTOW’s dog just to shut him up and because they are sociopathic cowards.”

And now a message for TamerLame’s underlings like Thegreatshebang and Male Sentient Void.  You guys are not welcome here.  I suspect it is only a matter of time when you finally decide TamerLame has gone too far and you show up here begging that I help you.  You saw what this guy was doing and, worse than doing nothing you went along.  You are complicit. Fuck You and Go to Hell!!!